Those who have tried yoga know the benefits that it gives a person mentally, emotionally, and physically. It’s welcome to both genders but the broadcast in media of women in tight clothing holding poses has caused yoga to be seen “only for women.” Slowly but surely, professional male athletes have turned to yoga for improvement in flexibility, prevention of injury, and the help with prolonging of career.
NBA star Joe Johnson of the Brooklyn Nets’ does bikram yoga before his practices. “I found myself meditating and really relaxing and clearing my thoughts”, Johnson said. 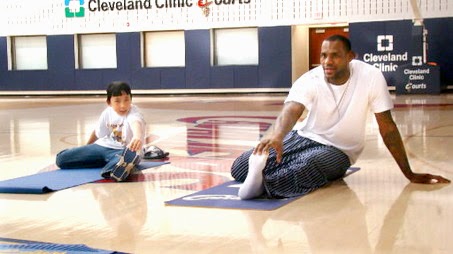 LeBron James of the Miami Heat referred to yoga as one of the “secrets” to his ability to hold up his long, ongoing career.
Ryan Lewis, linebacker for the Baltimore Ravens, does yoga for the motivation of a better lifestyle.
Because of the positive effects yoga has on athletes, sports teams have been pushing their players to incorporate yoga into their training. Who doesn’t want a relaxing rewind after a strenuous game or practice?
And for an even better ease of mind, Eros Sport offers athletes a great selection of compression style shorts that are versatile for any type of performance sports.
Posted by Eros Sport at 10:34 PM